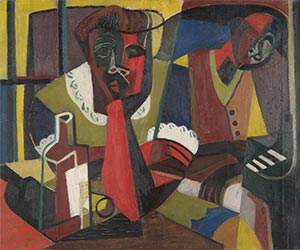 “Upon first glance of this piece I was attracted to its abstract but clear nature. The image of a Women and Man in a somber mood is clear to me but the motive of their emotions and connection is not. Have these characters been in a fight (?), are they making music together (?), is this bottle half full or half empty (?).

“Next, elements of the Harlem Renaissance and In A Sentimental Mood by Duke Ellington stuck out to me, so I wanted to make some sounds that represented and fit this vibe: a tale of two stories, separate but together. Unclear motives as a radio changes through stations. An out of tune/drunk piano weaving in and out of the background. Pleading and woeful vocals that dance back and forth with the cello melodies.

“As the lines in the piece show us the connection and disconnection, I wanted the cello melodies to connect both tales in the sound. Singing an unsung expressive tune in the first part and a somber familiar in the second. Could it also be heard as individual expressions of each character? It’s all up to you I guess. 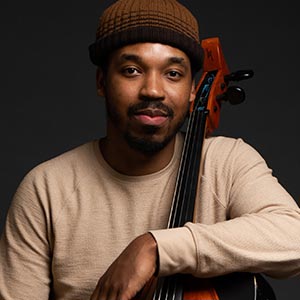 Avant Garde cellist and vocalist Jordan Hamilton merges musical styles to tell stories of the human experience through a variety of musical genres.

As a member of Last Gasp Collective and the Southwest Michigan Symphony Orchestra, Jordan can be found performing primarily in the Midwest, where he has opened for national acts such as Eric Roberson and Nappy Roots.

By merging songwriting, loop pedals, sample machines, cello, and vocals, the Western Michigan University Graduate creates an eclectic sound with his music. His most recent release “My Thoughts Are” is a compilation of thoughts that express themselves in hip-hop, folk, and soul music.