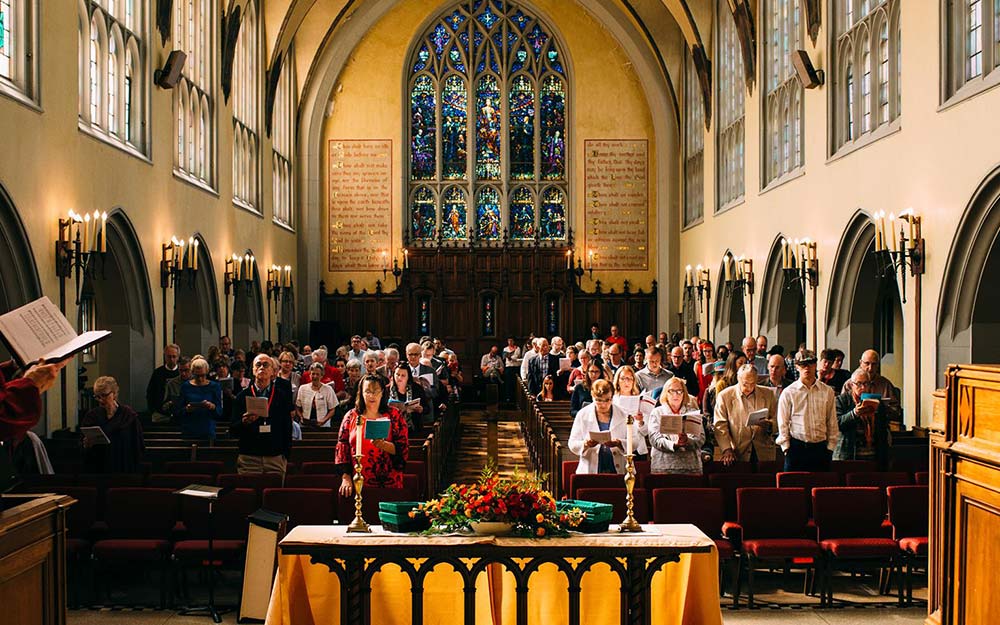 A community tradition since 1995, the annual Messiah Sing is a collaboration between the Michigan Festival of Sacred Music, First Congregational United Church of Christ and the Kalamazoo Bach Festival. The Sing features a chamber orchestra made up of professional musicians and soloists from the Kalamazoo area.

Portions of George Frideric Handel’s Messiah will be sung by those who wish to participate. Those who wish only to listen are welcome and encouraged to join us! Admission is free, a free-will donation will be accepted.

Please note: in compliance with venue guidelines, masks are required for singer-participants.

A Message about Handel from The Michigan Festival of Sacred Music, First Congregational Church, and the Kalamazoo Bach Festival:

Living in England, where he was a naturalized citizen, George Frederic Handel became a wealthy man. In 2015 it was revealed that part of his wealth came from shares he held in the Royal African Company, which dominated England’s participation in the Atlantic slave trade.

Chartered in 1672, The Royal African Company initially held a monopoly on English trade on the African continent. By the time of Handel’s birth, in 1685, it was transporting some 5000 Africans annually into slavery in England’s colonies in the Caribbean and what would become the United States. By the mid-18th century, the time of Messiah, England was the world’s leading slave-trading nation. At the height of the hugely lucrative trade, English ships carried over 20,000 human beings into slavery each year.

Handel’s patron, the Duke of Chandos, was also an investor in the RAC. In fact, 1/3 of the subscribers to the Royal Music Society, launched to provide Handel with a musical platform, held Royal Africa Company stock.

That number is worth noting, for our point in drawing this history to your attention is to emphasize how deeply music, like the other arts, is embedded in the institutions of its time. If we who love music truly want to understand it, we need to look at the cultural, social, political, and economic conditions of its creation. Western tradition tends to celebrate the individual genius, but in reality, creativity depends heavily on the work of many people, known and unknown, paid and unpaid.

It is painful to consider that the glorious phrases of Messiah, including its message of peace, hope, and divine love, owe something to the nightmare of human enslavement. Such is the infinite complexity of art, and of human lives. After much discussion, we have decided to embrace this complexity, and to ask you to do the same. Handel stands behind Messiah, but scores of people stand behind him, enabling his work. If we can hear them in Handel’s magnificent music, its power can help to heal the grievous wounds of history.

All in-person Festival events will follow state, local and venue COVID requirements. Please check our website for the latest updates!