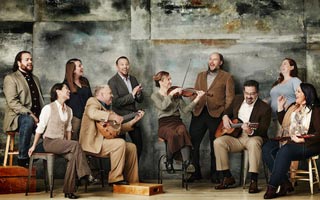 The Rose Ensemble with Piffaro the Renaissance Band

By popular demand, the Rose Ensemble returned to the Michigan Festival of Sacred Music in 2017, in collaboration with Kalamazoo’s own Bach Fest. The St. Paul, Minnesota-based vocal ensemble was joined by Piffaro the Renaissance Band (late Medieval and Renaissance music) and singers from the Bach Festival Chorus.

The concert celebrated the 500th anniversary of the Reformation; on October 31, 1517, Martin Luther nailed his “95 Theses” onto the door of the All Saints’ Church in Wittenberg, Germany and altered not only the world’s theological landscape, but also the entire European musical perspective.

This engagement was supported by the Arts Midwest Touring Fund, a program of Arts Midwest that is funded by the National Endowment for the Arts, with additional contributions from the Michigan Council for Arts and Cultural Affairs and the Crane Group.