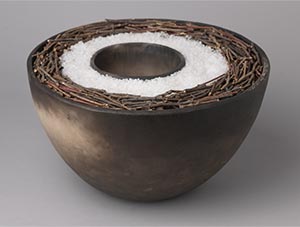 “This work, which I created using electric cello with flanger and digital delay pedals, played in real time, is a response to the textures and construction of Maria Scott’s Salt Bowl.

“The hard rock salt inspired the percussive and regular underpinning which is present throughout the piece. The twigs inspired the sounds made with the wood of bow hitting the strings, which are deliberately not coordinated with each other, nor with the crystalline regularity of the salt-inspired ostinato.

“The shape and texture of the bowls inspired the melodic material, which is somewhat scoopy at times, imitating the curve of the bowls.

“The music follows my thoughts, as I start at the outer large bowl, creating lower melodic material. As my eyes move toward the inner bowl, the melodic material sounds at a higher pitch. However, we never lose track of the other elements (larger bowl, salt and twigs), even as the focus is on the inner bowl. The repeating shape of melody which represents the larger bowl which essentially contains the entire work, is always there, as well. After contemplating the inner bowl the music briefly ponders the twigs and salt alone, before returning to the outer bowl, the lower pitches, though a ghost of memory of the impression of the inner bowl, the higher pitches, remains.

“The piece ends by reaching the deepest notes heard thus far, emphasizing the earthy nature of the bowls, as I imagine my eyes lingering on the outer bowl.” 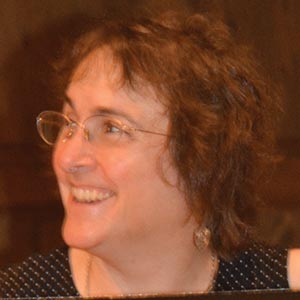