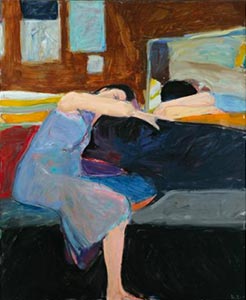 “My story about the Sleeping Woman, painted in the early 1960’s, but equally relevant today, is that she is an object of someone else’s painting, painted asleep in a seemingly uncomfortable position. My piece begins serene, woman embracing the normalcy, familiarity, and maybe the attention of being someone’s chosen object. But as she poses asleep, hour after hour, it occurs to her that something’s not right.

“You can hear the harmony change and the layers of harmonic color increase. She gets to thinking, ‘Wait!!! I have things I need to be doing!’ Her understanding of herself changes from someone who wants to be chosen to someone that chooses herself which is signified in the final chord.” 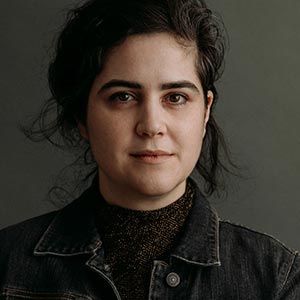 Ashley Daneman is a singer who a combines “a literary sensibility with a driving experimental jazz style where the heart of the song can find itself anywhere and always in a personal intimate space” (Marlbank). Her new release, People Are Fragile (Flood Music), traverses the emotional waters of pain, recovery, and rebirth following a series of losses.

Daneman grew up in Toledo, Ohio, studying classical voice and performing in musicals before turning to jazz and songwriting in her twenties. She honed her craft in Washington, DC, New York City, and by touring in the U.S. Daneman was also a resident artist at The Kennedy Center’s Betty Carter’s JazzAhead and The Banff Centre’s Jazz and Creative Workshop in Alberta, Canada. She earned her master’s degree from Manhattan School of Music under the guidance of Peter Eldridge, Kate McGarry, and Theo Bleckman.

Ashley lives with her husband, trumpeter Benje Daneman, and their three children in Kalamazoo, MI.